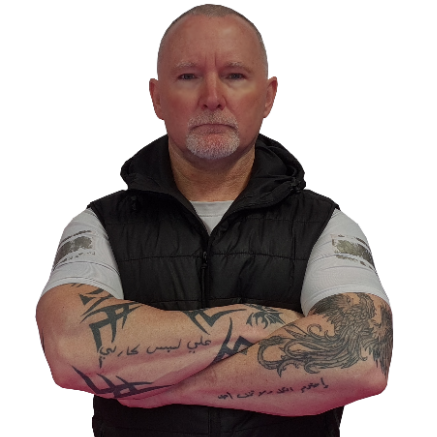 Karl was one of 538 Pty Ltd security groups top EPS (Executive Protection Specialist) Operatives and specialised as a Primary Escort and Secure Transportation driver. Karl was assigned to protect some of Australia’s top CEO’s and Executives for some of Australia’s leading companies. As well as protection services for well-known National and International individuals within the entertainment industry.

Karl is an active Agent for the Child Recovery Agency, (Formerly Silent Integrity Inc.) deployed to some of the world’s most high risk environments, conducting covert surveillance, intelligence gathering and child recovery (rescue) operations. As well as having worked with other NGO anti-trafficking organisation’s as part of a physical response team with the Royal Thai Police, Anti-Human Trafficking Division. Karl is also a contracted instructor for the Cambodian National Police Anti-Human Trafficking, Juvenile Protection, and Criminal Investigation Departments.

Karl is contracted by Government as well as Non-Government organisation’s for his expertise in Child Recovery, and his Anti-Human Trafficking, high risk environment skills.

Karl was awarded the Medaille OTT in 2012 by the International Bodyguard Association. This Medal is the IBA's medal for meritous and protective service by a person who has served in an area in conflict providing protection. Karl was awarded the Medaille OTT for his operational service in South East Asia in protective services and his exemplary behaviour under hostile conditions. Also being awarded the Guardian Cross of Merit (First Class) in 2021

In 2019 Karl was awarded The Most Professional Child Recovery Agent by Corporate Visions Global Security Awards.

Karl, is a Registered Instructor with the World Combat Association.

The WCA was founded by Peter Consterdine and Geoff Thompson of the UK’s British Combat Association (BCA); an organisation that changed the face of traditional martial arts, not only domestically but in a wider international context.

Launched in 2008 by Peter Consterdine, with Geoff Thompson as Co-Chief Instructor, the WCA is the organisation for our international groups and their Instructors. The WCA was, very much, a product of demand. For many years, overseas interest in the British Combat Association could not really be satisfied by a domestic U.K. organisation, hence the formation of the World Combat Association where all the benefits of membership open to our BCA people are now available globally.

Karl is also the International author of the best selling books, Violence Evolving, Controlling Distance, In Your Hands, and the book about Saving Children The Karl Thornton Story.

To read more on Karl Thornton's Qualifications and professional memberships.